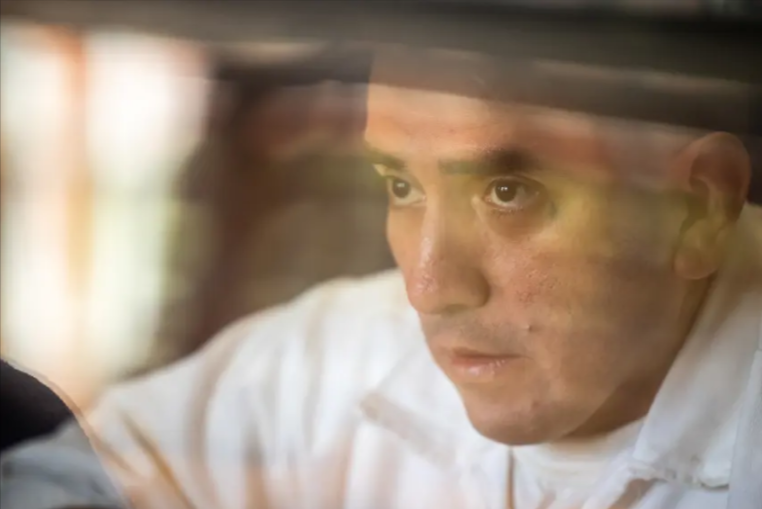 The state was experiencing its hottest July in recorded history, and he, like most Texas prisoners, was locked inside a concrete and steel building without air conditioning. It had been months since he last felt cool air on his skin. A heat rash snaked up his arms.

Living on the highest tier of a cellblock in East Texas’ Ferguson Unit, he couldn’t lie in his metal bed — it was hot to the touch. Instead, he wet the floor or his sheets with the hot water that came out of his sink and spread out on the concrete. He still couldn’t sleep.

“In my mind, I’m saying, ‘Is this the way I’m going to have to live? … I don’t think I’m going to make it,’” Segovia recalled in the prison’s visitation room last week, the first time in months he’d been in air conditioning. “I’m already 40 years old. I’m not a youngster anymore, and I just don’t want to die back here.”

Every summer, Texas prisoners and officers live and work in temperatures that regularly soar well into triple digits. More than two-thirds of the state’s 100 prisons don’t have air conditioning in most living areas, putting tens of thousands of men and women under the state’s care in increasingly dangerous conditions. Climate change is expected to bring even hotter summers.

The heat has killed prisoners and cost millions of taxpayer dollars in wrongful death and civil rights lawsuits, with a recent fatal heat stroke reported in 2018. In 2011 — a blisteringly hot summer that the state climatologist has compared to the current one — at least 10 Texas prisoners died of heat stroke, according to court reports. The death count is likely higher since scientists have found extreme heat is often overlooked as a cause of death.

After a flood of lawsuits throughout the last decade, the Texas Department of Criminal Justice has made some changes to lessen the suffering from its stifling temperatures. Most notably, it settled a yearslong court battle by agreeing to cool a geriatric prison, the Wallace Pack Unit southeast of College Station. The new air conditioning cost the state about $4 million. The legal fight over installing it cost more than $7 million.

The agency also enacted new policies under court orders to try to help those in uncooled prisons. Officials moved those deemed more likely to become ill or die from the heat into air-conditioned beds. That includes elderly prisoners, those with diagnosed medical conditions like heart disease or diabetes, and those on medication that affects their body’s ability to regulate temperature.

And they updated old heat policies, requiring staff to regularly provide ice water and cups to prisoners, take them to cool off in air-conditioned areas of the prison when requested, allow for extra-cold showers when possible and provide personal fans.

The agency has said the policies are working, reporting 11 prisoner heat illnesses and 16 for staff last year and only 12 heat-related illnesses for prisoners and 21 for staff this year through last week. 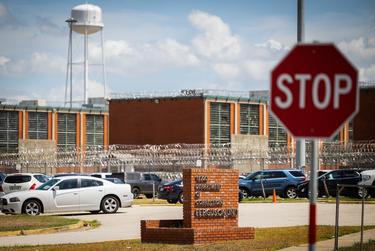 The Ferguson Unit, a notoriously hot prison in East Texas, has no air conditioning for any prisoner housing areas, including solitary confinement. Credit: Annie Mulligan for The Texas Tribune

But prisoners and their supporters regularly say throughout the system that the policies aren’t consistently followed, and they believe most illnesses aren’t recorded. It strikes them that more heat-related illnesses are reported among staff than inmates since prison workers get to go home each day.

“There’s glaring violations of policy,” said Amite Dominick, president of Texas Prisons Community Advocates. “We’ve got ridiculous levels of heat, and no one’s doing anything. They’re just sweeping it under the rug.”

One example is Robert Robinson, who a medical examiner ruled died of environmental hyperthermia, or heat stroke, in 2018 at the Michael Unit near Palestine. The agency has denied the death was heat related, saying the 54-year-old’s cell was air-conditioned and he had other health complications. A TDCJ spokesperson said this week “the results remain unclear.”

(The next year, Seth Donnelly died at the Robertson Unit in Abilene. The 29-year-old put on padded suits to train search dogs, though it’s unclear how much of an effect heat had on his death. A medical examiner found he died from methamphetamine toxicity with hyperthermia.)

At a legislative budget hearing last month, TDCJ Executive Director Bryan Collier said there have been no heat deaths since 2012.

Beyond the courts, substantial change lies in the hands of the Texas Legislature. Texas county jails are required to be cooled to at least 85 degrees, but state lawmakers have previously rejected proposals to air condition state prisons after seeing the expected price tag. TDCJ has estimated it would cost $1 billion to cool all of its prisons, a number lawmakers rely on despite the prison system having grossly overestimated the cost of cooling the Pack prison in court.

Next year, however, lawmakers are expecting to get an extra $27 billion to spend in the 2023-24 budget. Segovia and prison rights advocates hope that surplus will encourage the Legislature to open up their wallets and finally put air conditioning in all Texas prisons.

“We better do something quick,” Segovia said. “I’ve been hearing more and more every year it’s going to get worse and worse, and we’re already seeing it.”

During his first nine years in prison, serving a 40-year sentence for aggravated robbery, Segovia was in an air-conditioned cell at the Michael Unit, about 90 miles north of his new prison in Midway. When he learned he was being moved to Ferguson, a notoriously stifling prison, he thought at first other men were exaggerating. He’d worked in construction and warehouses in Texas — he knew heat.

When summer came around though, he said it was an entirely different story. His small cell at the top of the warehouse-sized building is made up of three solid concrete walls and a barred door that faces a wall of windows across the tier. In the afternoon, the sun beats down through the glass relentlessly.

“It’s a living hell,” he said. “There’s no air vents. There’s no circulation. It’s just like an oven in there.”

A July study by TPCA and the Texas A&M University Hazard Reduction and Recovery Center surveyed hundreds of prisoners between 2018 and 2020 and found many reported a barrage of illnesses, including heat cramps, rashes, migraines and repeated fainting or trouble breathing.

“I fainted four times in my cell and no reports were filed and I received no medical attention,” one prisoner at the Scott Unit in Brazoria County wrote to researchers.

They also reported a lack of access to relief required by TDCJ policies, like cups, ice water distribution and respite time in air conditioning or cold showers. At least four prisoners from four different prisons wrote that large coolers filled with ice water for groups of prisoners had maggots, roaches or rats inside them. 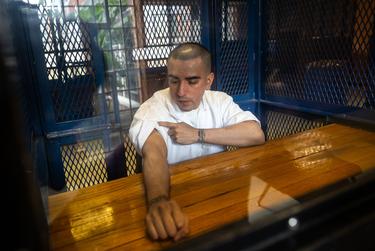 Segovia shows a heat rash on his arm while talking to a reporter at the Ferguson Unit. Credit: Annie Mulligan for The Texas Tribune

Segovia said he never gets access to cool-down showers. His row’s shower, he said, is barely dripping with room-temperature water, so he usually just washes himself in his cell’s sink. Staff also doesn’t take them to cool off in air-conditioned areas, he said.

“In order for them to go up there, you’ve got to be literally dying,” he said.

Asked about how the agency holds itself accountable to follow its heat policies, TDCJ spokesperson Amanda Hernandez cited prisoner grievances — a written complaint filed by prisoners to staff.

“When investigating a heat-related grievance, steps are taken to verify and ensure that all temperature mitigation measures in [policy], such as access to respite areas, cold showers, ice water, and fans are being followed,” she said.

The heat also affects the dwindling number of officers who supervise prisoners. Segovia said he went entire days without an officer bringing him the required ice water because he was on the highest and hottest tier. Sometimes, he didn’t even blame them.

But it still leads to protests. Segovia said men in his cellblock scream, bang on bars, set fires and flood their cells to get attention from officers. He said flooding gets especially bad when officers don’t pass out the cold water.

At the legislative hearing, Collier said he believed air conditioning would improve the state’s longstanding issue of recruiting and retaining officers.

Of about 133,000 beds for prisoners in state prisons, Collier said about 41,000 — less than a third — are in air-conditioned areas. This year, air conditioning is being installed to cover another nearly 1,000 beds at several units, he told lawmakers. And next year, about 5,800 more beds will be cooled at intake prisons, where people are often coming from already-cooled jails to start their prison sentence.

Hernandez said next year’s projects will cost an estimated $12 million, funded through the agency’s existing budget.

Last year, the Texas House passed a measure to incrementally install air conditioning in all prisons by 2029, capping total costs at $300 million. Lawmakers didn’t provide the money, however, and the Senate never took up the bill. But with rising temperatures and a big surplus in next year’s state budget, some lawmakers are hoping this is an investment the state will take on.

Lt. Gov. Dan Patrick, who heads the Senate, did not respond to questions about his support for prison air conditioning in the next legislative session, which begins in January. A spokesperson for Gov. Greg Abbott said he “looks forward to continuing working with the legislature to effectively allocate budget resources to help all Texans across the state.”

“We are talking about having this large amount of surplus dollars … for one-time investments,” said state Rep. Donna Howard, D-Austin, at last month’s budget hearing. “I hope this is something we can look at.”

Disclosure: Texas A&M University has been a financial supporter of The Texas Tribune, a nonprofit, nonpartisan news organization that is funded in part by donations from members, foundations and corporate sponsors. Financial supporters play no role in the Tribune’s journalism. Find a complete list of them here.

The full program is now LIVE for the 2022 The Texas Tribune Festival, happening Sept. 22-24 in Austin. Explore the schedule of 100+ mind-expanding conversations coming to TribFest, including the inside track on the 2022 elections and the 2023 legislative session, the state of public and higher ed at this stage in the pandemic, why Texas suburbs are booming, why broadband access matters, the legacy of slavery, what really happened in Uvalde and so much more. See the program.

This article originally appeared in The Texas Tribune at https://www.texastribune.org/2022/08/24/texas-prisons-air-conditioning/.

The Texas Tribune is a member-supported, nonpartisan newsroom informing and engaging Texans on state politics and policy. Learn more at texastribune.org.

Harris County Judge Lina Hidalgo announced Tuesday that a local child younger than two-years-old has tested presumptive positive for monkeypox, marking the first pediatric case of the virus reported in Texas. During the news conference, Hidalgo said the child, who has not been in daycare or school, is currently asymptomatic with a rash, but is…

UVALDE — Alfred Garza III wakes up around 11 a.m. most days and downs a can of Monster Energy drink. After a shower, he heads to a popular eatery here, El Herradero de Jalisco, and orders a fajita chicken salad. Then, he makes his way to his father’s mechanic shop, where he hangs out until…

Texas to execute man for slaying of real estate agent

HOUSTON (AP) — A man who fatally stabbed a real estate agent inside a model home in suburban Dallas faces execution Wednesday evening, more than 16 years after the slaying. Kosoul Chanthakoummane was on parole when he was condemned for killing 40-year-old Sarah Walker in July 2006. She was found stabbed more than 30 times…